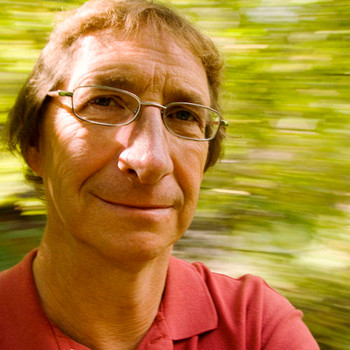 While I've been pursuing photography since high school, the start of my serious work coincides with the completion of my formal, university education as an architect in 1980. At that time, I was working with a 4" by 5" view camera, doing architectural and landscape studies in rural Manitoba. I now consider these as valuable, timeless documents since many of the rural buildings I photographed have since disappeared.

Within a few years, I began experimenting with ways of expanding my view. This is perhaps a natural outcome of photographing on the prairies where the horizon extends forever and it seems pointless to aim a camera in any one direction. I wanted to capture the broad expanse of a space, as well as the objects that you might see in that space. The first major project that attempted to expand my viewpoint was an assembled panorama entitled "The Lake". I next acquired a used Horizont swing lens camera and produced a portfolio of monochrome prints. In 1989, I acquired an antique Cirkut No. 6 Outfit that allowed me to produce full-circle, continuous panoramas. I completed four projects using this camera: In a Circle of Light, Grasslands, Silver and Building Homes.

In 1996, I acquired my first computer. Working digitally opened many new possibilities for creating work and the challenge became one of corralling all those possibilities and finding a creative direction. I was a very early adopter of the QuickTime VR program by Apple, so early that the program required that I write basic code. However, it was quite revolutionary for me. It allowed me to take a series of pictures and, on the computer, stitch the pictures together into a 360 degree panorama. By this time, my Cirkut camera was retired, as was my traditional "wet" darkroom. Inkjet printing technology has advanced significantly over the years and today I can produce exhibition quality work that rival my wet darkroom prints in terms of quality and longevity.

In 2002, I purchased my first five megapixel digital camera and since then have not shot any film at all. Again, the advances in digital cameras have been tremendous. Today I work with primarily with a DSLR camera.

In late 2004, work began on the Walk project. Visually, the Walk images look dramatically different than my previous work but, in many respects, the work is consistent with the themes and techniques I have been exploring since 1980. Still, I like to think of Walk as a significant departure. I find the whirling sense of energy embodied in the work I am producing for this project reflects the renewed sense of energy I feel for photography.

Over the last few years, my goal has been to use my photographic background as well as my background as an architect to sculpt space and create lasting urban environments. To this end, my recent public art projects have focused on photography that draws upon the local environment in an abstract way and incorporating the resulting images as part of a large scale three dimensional environment woven into the day-to-day lives of those passing by or through the art space.
© David Firman
Powered by ZENFOLIO User Agreement
Cancel
Continue