Thank you for your patience while we retrieve your images.


We were on our flight from Winnipeg to Toronto, the first leg of our trip to India. It was a full flight and my wife and I were not able to sit together. Unusual but, as it turns out, the start of a new friendship with Shirish who was also on his way to India. Except, in his case, he was returning home to his family in Mumbai. Shirish, by good fortune, was seated beside my wife. The two struck up a conversation and, by the time we arrived in Toronto, Gail and I had a standing invitation to visit him in Mumbai, which would be the last stop on our tour of India.


So we are about to fly to Mumbai from southern India. We email Shirish, he meets us at the Gateway to India and we are off for the next few days to tour the sites of Mumbai with him. But he also invites us to his family home in the suburbs of Mumbai which, as it turns out, is also the day before Holi.


Holi, the Hindu “Festival of Colours” has both religious and seasonal meaning but, largely, it is a wild party, a chance to let loose, an occasion where caste, color, race, gender and social status lose meaning, at least temporarily.


The next day, Holi. We come fitted with sacrificial T-shirts and pants. The party gets underway in earnest. Water is sprayed. Water cannons are everywhere. Vibrantly coloured dye is liberally thrown, mostly by children, but everyone is a target. Dancing. Music. Pure happiness. After a few hours of this, we all clean ourselves, no small feat given the staining power of the bright dyes in our hair and on our clothes. We are invited to a gathering of friends and family for a feast of Indian delicacies. And then, I am afraid to say, we are off to the airport as we wind our way back to Canada. But Holi. What more appropriate summation to our India journey than Holi.
© David Firman 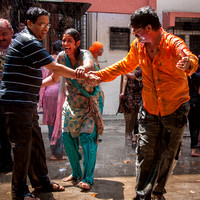 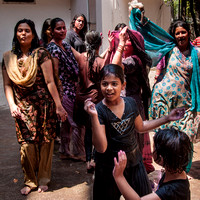